When a database is large or complex, the field elements have many levels. Expanding a CrossTab report field element reveals all hidden details associated with a field. Expanding (or “drilling down”) is a navigational technique that lets you explore levels of data ranging from the most general (up) to the most detailed (down).

For example, assume your database contains information about the Olympic Games. If you drill down “Olympics,” details display that contain information related to the Olympics: whether it was a winter or summer games, the country that hosted the Olympics, and the city where the games were held. Because some countries have hosted more than one Olympics, there are more details associated with those countries. 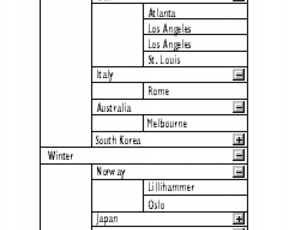 Drilling down is useful for analyzing data or comparing the details of one element with other elements. It takes you from the most general detail of an element to the most specific.

Because OLAP source data is often very large, it is important to be able to minimize the amount of information that appears in your CrossTab reports. Level filtering lets you select specific field elements from the level to display in the CrossTab report, rather than displaying all elements in a level.

You can also remove elements from an OLAP CrossTab report to minimize the amount of data.