You can use area charts to illustrate the amount of change over time. For example, you can use an area chart to show the change in electricity consumption rates over a number of years. Area charts are similar to line charts, but the area beneath the line is shaded. Columns of data are stacked on top one another, with a different shading color assigned to each column. 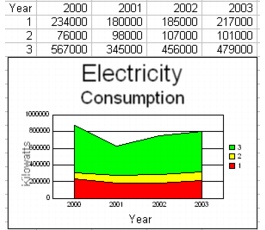