Sorting data lets you order multiple criteria based on sort keys within a sort selection. For example, you can sort data in ascending order.

Sorting data in ascending order organizes a selection in the following sequence:

For example, if you sort data in an address book in ascending order using the sort key “LAST_NAME,” all last names display in alphabetic order, starting with “A.”

Up to five sort keys can be specified. Sorting begins with the first key; however, if there are two identical entries, Quattro Pro looks at the second key for those particular entries. If the first two fields are identical, the third key determines sort order, and so on. 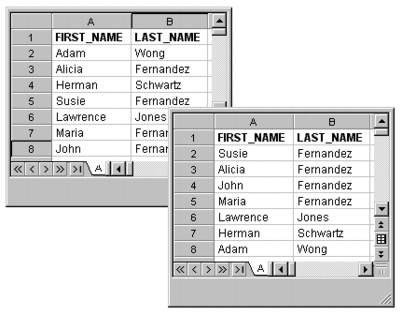 This example shows a list of names before and after you sort by LAST_NAME, in ascending order.

If you add the FIRST_NAME field as the second sort key, the Fernandez records would sort in this order: 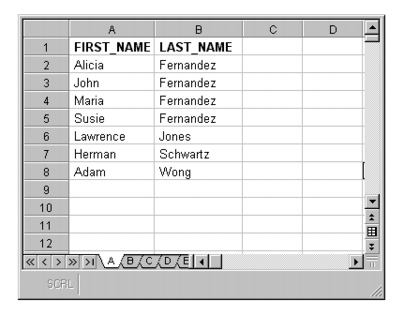 The results of sorting the same name list by LAST_NAME, and then by FIRST_NAME, in ascending order.

You can also sort data automatically, reverse previous sort settings, and preserve the original sort order so you don’t lose a particular organization of data.

Data added to a spreadsheet after sorting data is not displayed in the sorted order. To include the new data in the correct sort order, you must re-sort the data . Likewise, formulas that refer to cells outside of their row do not update when you re-sort data. If your sort selection contains formulas that reference cells outside the sort selection (for example, +A2), make them absolute (+$A$2) or convert them to their end values before sorting. For more information about making cell addresses absolute, see “Setting cell addresses.” For more information about converting formulas to values, see “To convert a formula to a value.”